The Mr. was away on business this week, which left me eating grilled cheese sandwiches and carrot sticks with the kiddos all week.  Needless to say I was ready for some “grown up” food by the time the weekend hit. 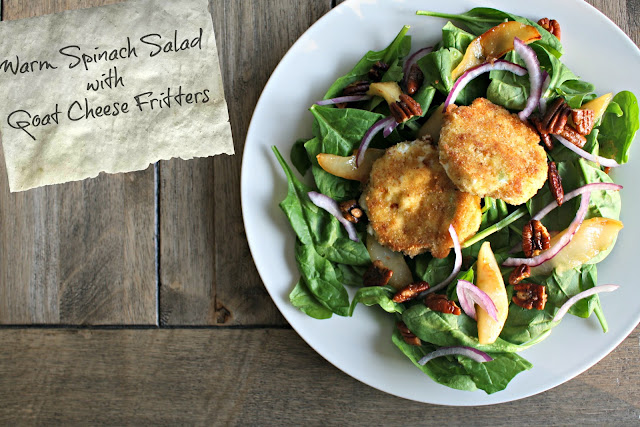 This salad is so delicious, and it’s hearty enough for an entree.  The recipe actually calls to add grilled chicken on top but I totally forgot to buy chicken at the grocery store didn’t, um, feel like chicken… 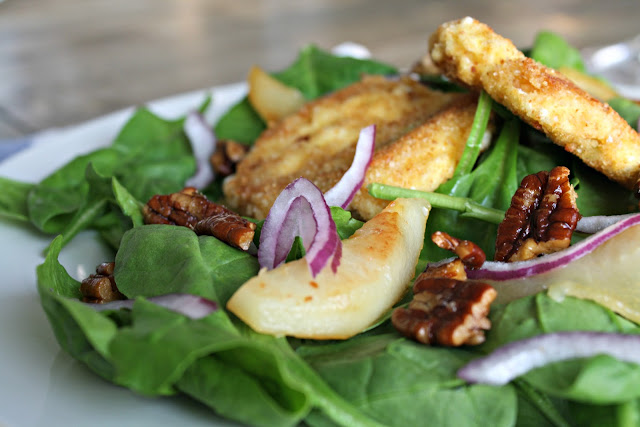 This recipe is from one of my favorite restaurants from when we used to live over in Ann Arbor.  It’s called the Common Grill.  We only lived there about 6 months (in which time we purchased, gutted, remodeled, and sold a house just as the last coat of paint was drying, but that’s a story for another day!  Ooh maybe I’ll do a before and after post about it hmmm…), but I think we ate at the Common Grill at least 10 times!  Luckily for me (and you) the Chef has written 2 amazing cookbooks so I can make some of my favorite dishes at home.

I modified this recipe a bit so I could make it for just the hubby and I.  I’m not gonna lie this is a little more labor intensive than your average salad, but it’s worth it. 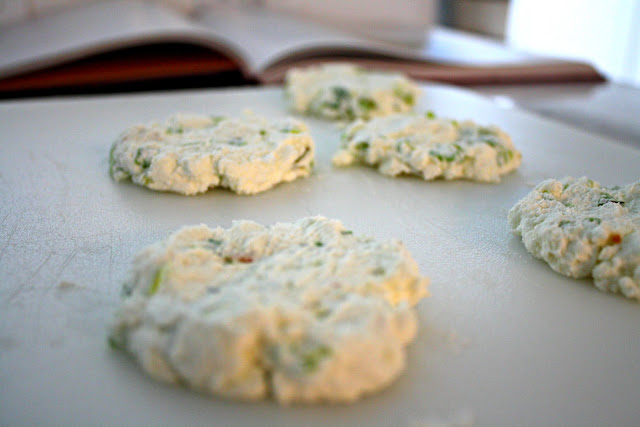 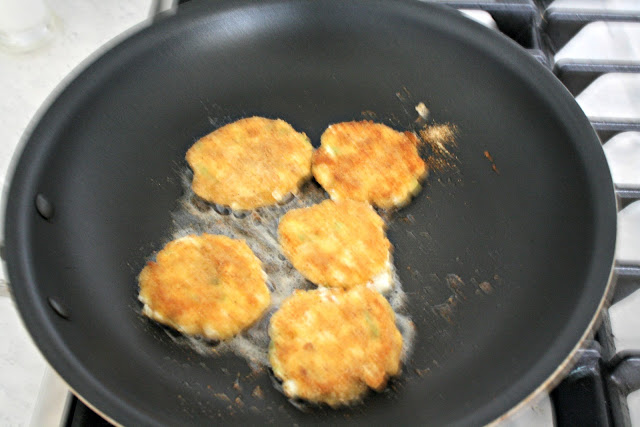 Then caramelize the pears. 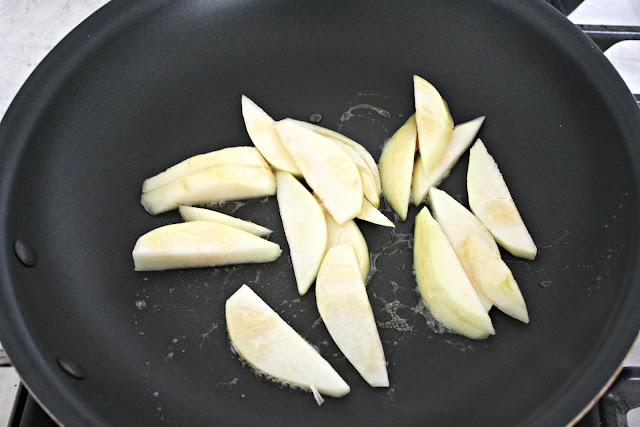 You want them to look like this when they are finished. 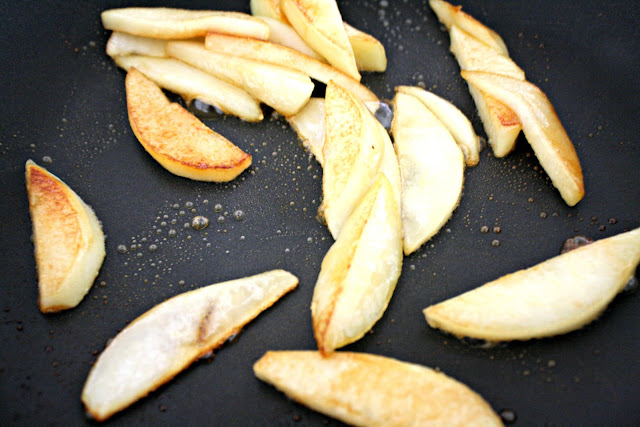 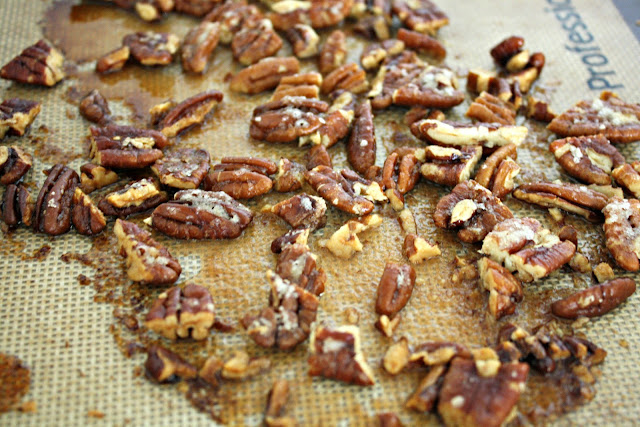 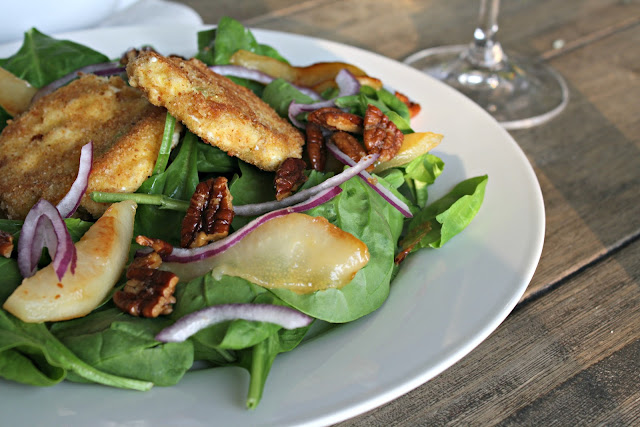 RECIPE
FRITTERS:
Saute 3 tbsp finely chopped leeks (hint: the best way to wash leeks is to slice them up and put them in a bowl of water so that all the dirt sinks to the bottom) with 1 clove of finely chopped garlic until soft.  In a bowl combine 4 oz of goat cheese with 1 tbsp of sour cream.  Add the leeks and garlic and mix well.  Use 1/4 cup of mixture to form each patty.  Dip in egg wash (1 egg lightly beaten with a tbsp milk) then dip in breadcrumbs and lightly saute in olive oil until golden brown.  Set aside while you make the rest of the components, you can rewarm them in a 350 oven if needed.  (This worked great because I actually made them during nap time and reheated them for dinner.) 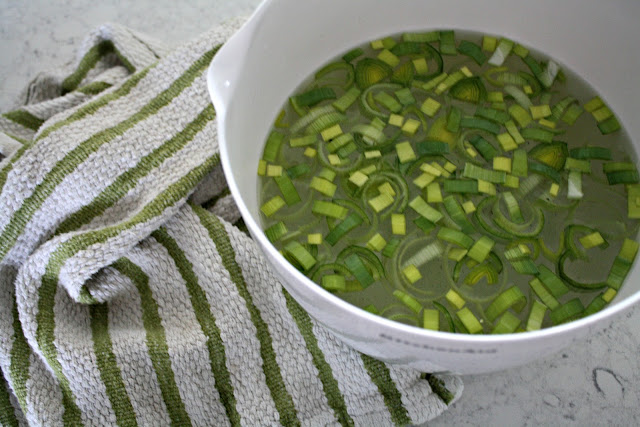 CARAMELIZED PEARS
Peel and slice 1 pear thinly.  Saute in a pan with 1/4 cup honey, until honey evaporates and pears are golden brown.
SUGARED PECANS
Combine 2 tbsp melted butter with 2 tbsp sugar, a pinch of salt and 1/2 C pecans.  Roast in 350 oven on a cookie sheet (I use a Silpat mat so there is less mess) for 10 minutes.  Allow to cool.
WARM BACON DRESSING
Saute 4 pieces of bacon until crisp, set aside.  Use 1/8 cup bacon drippings plus 1/2 cup olive oil in pan.  Saute 1/4 cup shallot finely diced and 1 clove garlic finely diced until soft.  Add  1/3 cup balsamic vinegar and 1 1/2 T brown sugar mix well.  Crumble bacon into dressing.
ASSEMBLE
Arrange baby spinach on a plate, top with pears, pecans, thinly slice red onion, and goat cheese fritters.  Drizzle warm bacon dressing over top.
NOTE:  If you wanted to go vegetarian with this dish, we both agreed that a balsamic vinaigrette or poppy seed dressing, instead of the Bacon Dressing, would be delicious also. 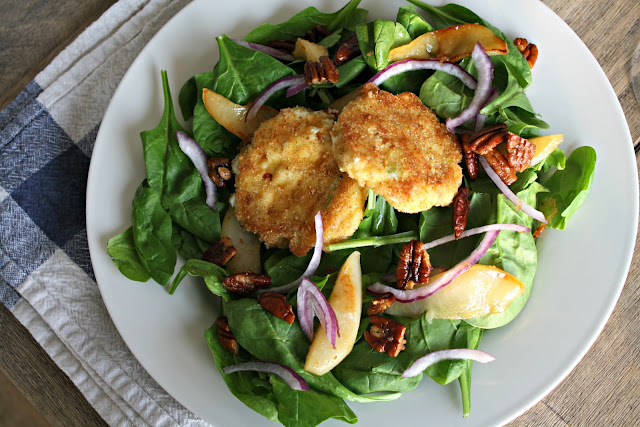 This was another great “Date Night In” meal but what I’m really excited to share with you is the amazing dessert I made to go with…hope you come back later in the week to check it out (although you may want to hit the gym now, it’s not exactly low cal :) )!

And if you are anywhere near Chelsea MI you have to try the Common Grill, it’s sooooo good. Or check out their website where you can order one of their fantastic cookbooks! (the recipe this was based on is in “Return to the Common Grill”) 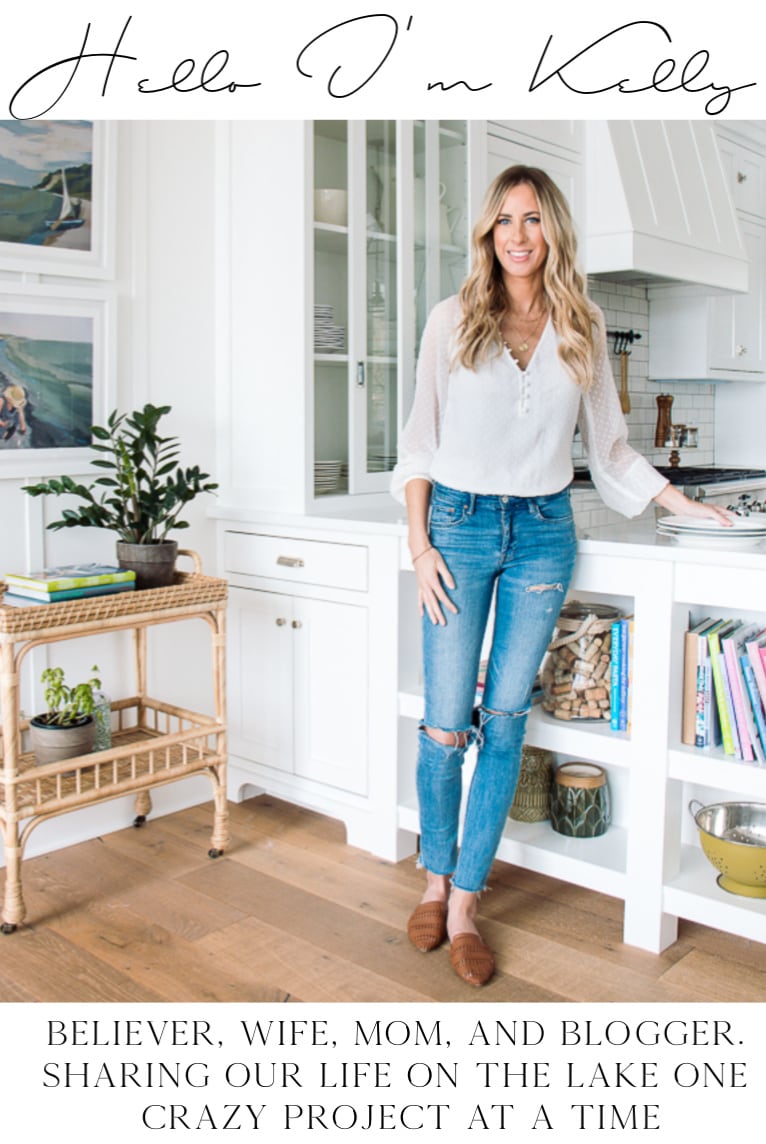