Ok as promised, the easiest (well relatively easy, especially if you aren’t going up a staircase) add character to your home DIY plank wall – no power tools required!  Earlier this week I showed you all the pretty details of my new entry, but now I’ll show you the nitty gritty of how I got it done (or get er’ done for my redneck friends). 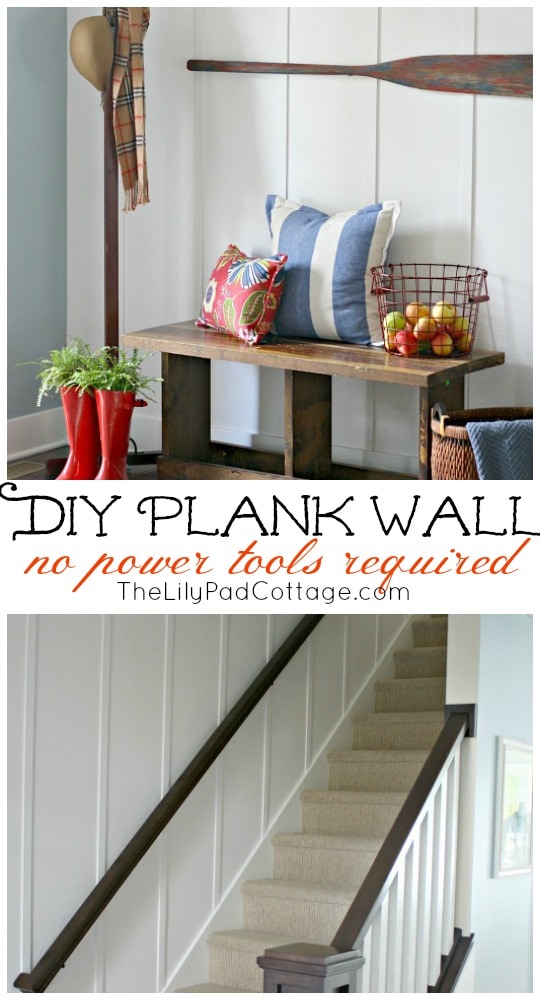 So I would like to tell you that I totally planned and measured and drew elaborate plans before starting this, but you know that’s not my style.  I have been obsessing about planking this wall and it was finally fall (see the deal I made with my hubby here) so I innocently drove to Lowe’s thinking I would start “just looking” at what kind of supplies I would need…

well “just looking” at a home improvement store  for me is kind of like “just looking” at puppies (don’t get the Mr. started on how we ended up with our dog Buddy)… 20 minutes later I found myself loading up my car with 10 ft whitewood trim.  You can find this over by the other moldings, it’s about 1 inch and 1/2 wide and only 1/4 inch thick (just ask someone if you can’t find it the people at Lowe’s are great).  I guessed I needed 18 or so…2 trips back later I guess measuring sometimes is a good idea… Once again I was the crazy lady with boards hanging out my passenger window between the car seats.

Now if you have 8 foot ceilings you don’t need to look like a loony bin driving down the road with them sticking out your window, just grab the 8 foot boards, but we had to be all difficult and have 9 foot ceilings.

small level (more on this later)

First up I painted the wall white, it was much easier to paint it before all the molding was on and bonus once I had it all painted SURPRISE when the MR. came home from his business trip – there was no going back :)

Then I painted all the planks, mainly because I know how much the Mr. would appreciate stripey zebra print garage floors – they go so well with all my technicolor spray paint polka dots (I know, I know, he is SO lucky to have me).  You’ll still need to do a touch of coat, but it was easier to have one coat down. 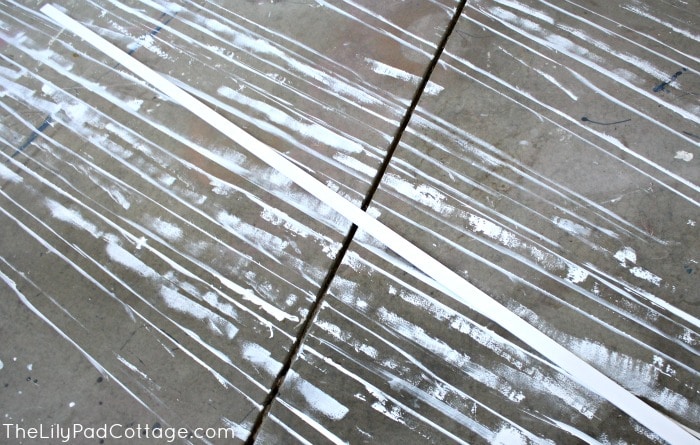 Next plan your boards and spacing out,  I decided to make my spacing the exact width of my level (13 inches).  It made it so much easier not to measure every time.  I just stuck my level between each board and went to town. 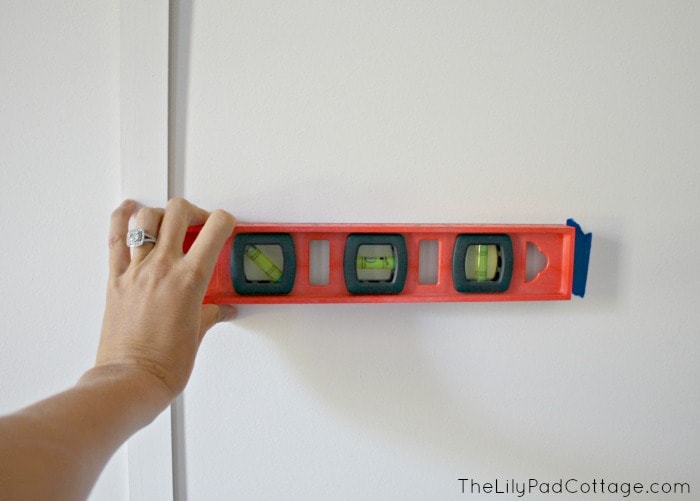 It’s best to take a little time and plan this part out so you can avoid light switches, outlets, railings and any other crazy corners or whatnot your wall might have.  This makes your cutting so much easier down the road.  I used painter tape to mark it all out.

Then I measured the height of the wall and cut my boards to fit, here is where I wish I had some cool power tools, but alas all I have is this lame hand saw and miter box.  Which is really all you need – these boards are super thin so they take about 2 seconds to cut through and a miter box and saw only runs about $10.

Now onto the first board, which I needed a little help with…

The key with getting the Mr. on board with any of my DIY projects is this 1. it’s gotta be cheap 2. don’t involve him…

I tried not to involve him, I really did, but getting the first board absolutely straight is imperative to this project working out, and hello, you know I don’t like to measure or be picky with the level.  So I did what I normally do I sighed…a lot…and then said “do you think you could pretty please help me with just this one board (ahem, here he is 15 boards later….). 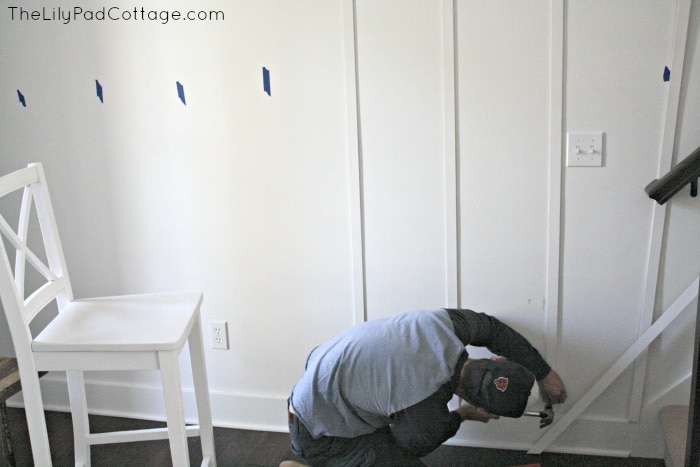 Once I enlisted his help, I dotted a little liquid nails every 6 inches on the board (not too much you don’t want it to squeeze out the sides) and slapped it on the wall.  We still couldn’t get it totally straight because none of the boards were totally straight, no worries though just put a little finishing nail or 2 to keep it in place.  Once you have the first one down the rest are a breeze!

Countersink your nails with the nail set and fill in the holes with wood putty.

I ran a bead of caulk up both sides and the top and the bottom, then ran my finger along it to smooth it out.  This really helped it match the look of the rest of our moulding.  Add your second coat of paint and you’re done! 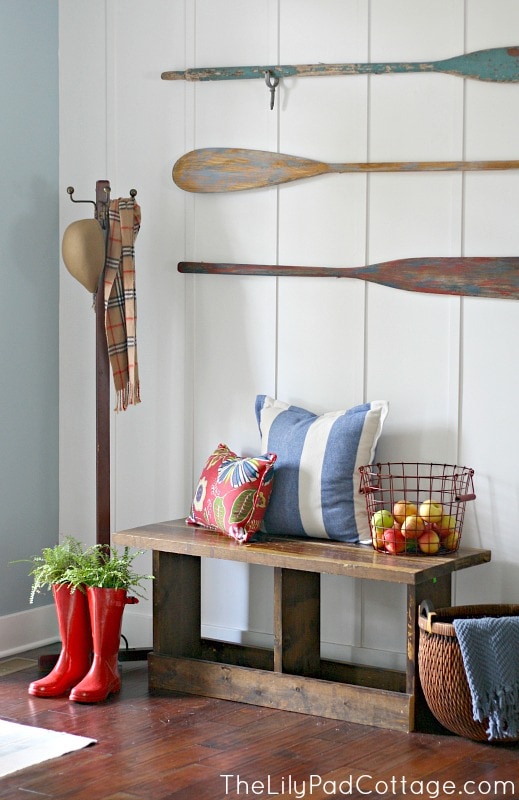 Unless you are going up your 2 story staircase…then it’s a bit more work.  This really isn’t any harder unless you are afraid of heights, falling off ladders, breaking your neck etc…

I won’t give you the exact details of how we set up our ladder on the staircase, because I don’t want any one to try it this way themselves (this is my big “Don’t try this at home kids!”) but I will say it involved a stack of vintage books and several discarded cinder blocks.  Yeah, it was totally safe and OSHA approved. If you have the proper ladder though, you will be fine!

Here is where the Mr. and I began to argue about who was worth more alive me or him…I finally made my case about half way up the wall when we started to talk life insurance policies. I was relieved to switch spots for a while as I was starting to imagine my obituary in the newspaper “local crazy blogger woman breaks her neck foolishly attempting an ill advised DIY project while using a pile of vintage books to level a ladder..” you get the idea.

Really though once you master the ladder, it’s just a matter of cutting your boards at the right angle on the bottom to run up your stairs.  The miter box has 2 different angles on it, neither were exactly right but the caulk filled in the little bit that it was off. 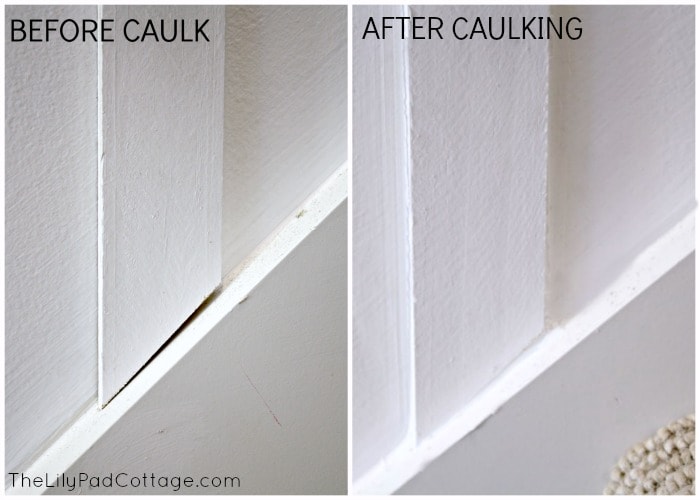 So now that you know how easy it is, go forth and plank…your walls not the exercise move, although I could probably stand to do a few of those too…

I got a little obsessed with how this looked and did one more wall at the top of the stairs with it, I’ll be back next week to share that along with some easy wall art you can make too!