We’ve been brainstorming away over at the guest cottage. While still mostly in the planning stage, we have made a little bit of progress. Mostly in the form of demo! 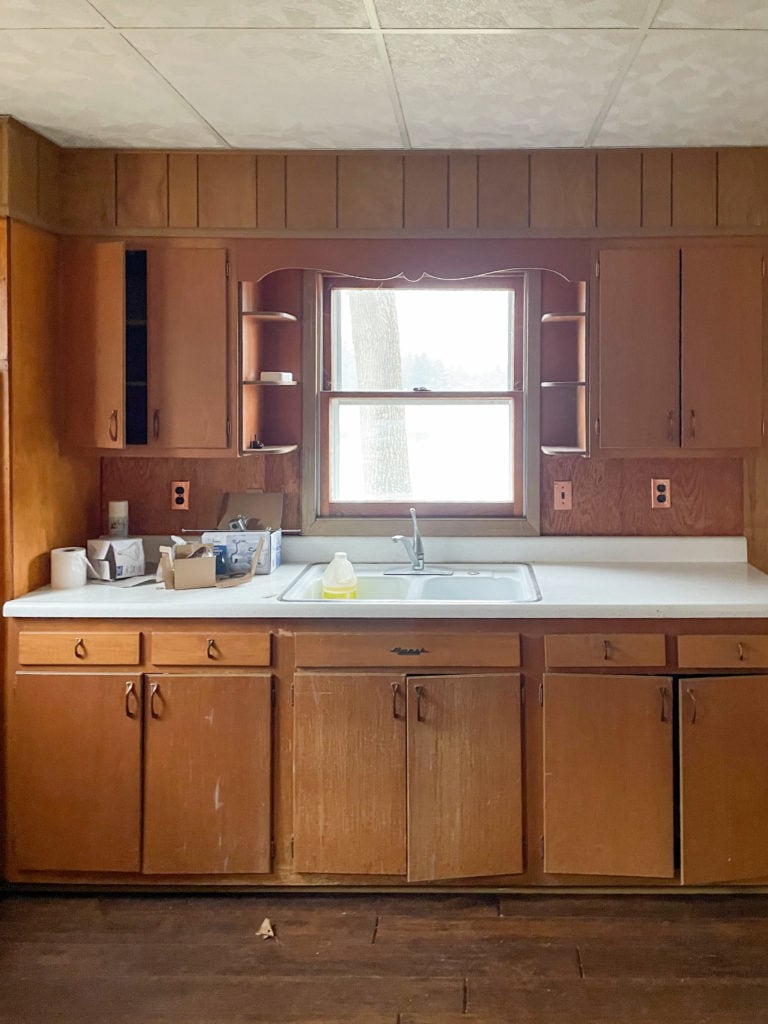 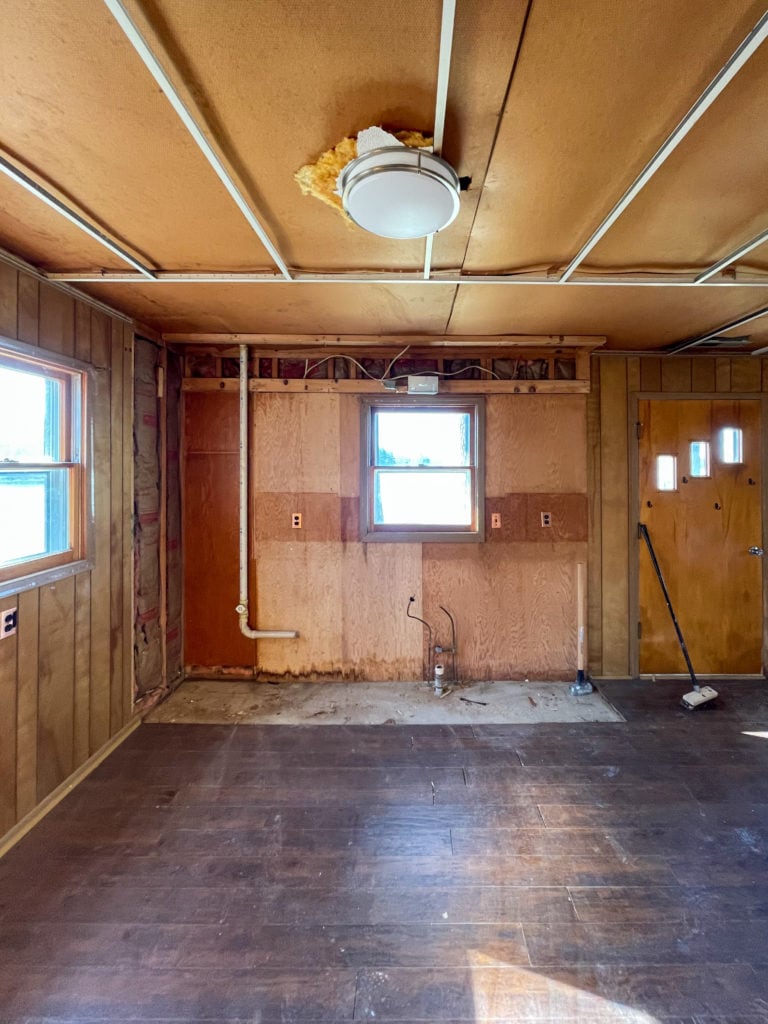 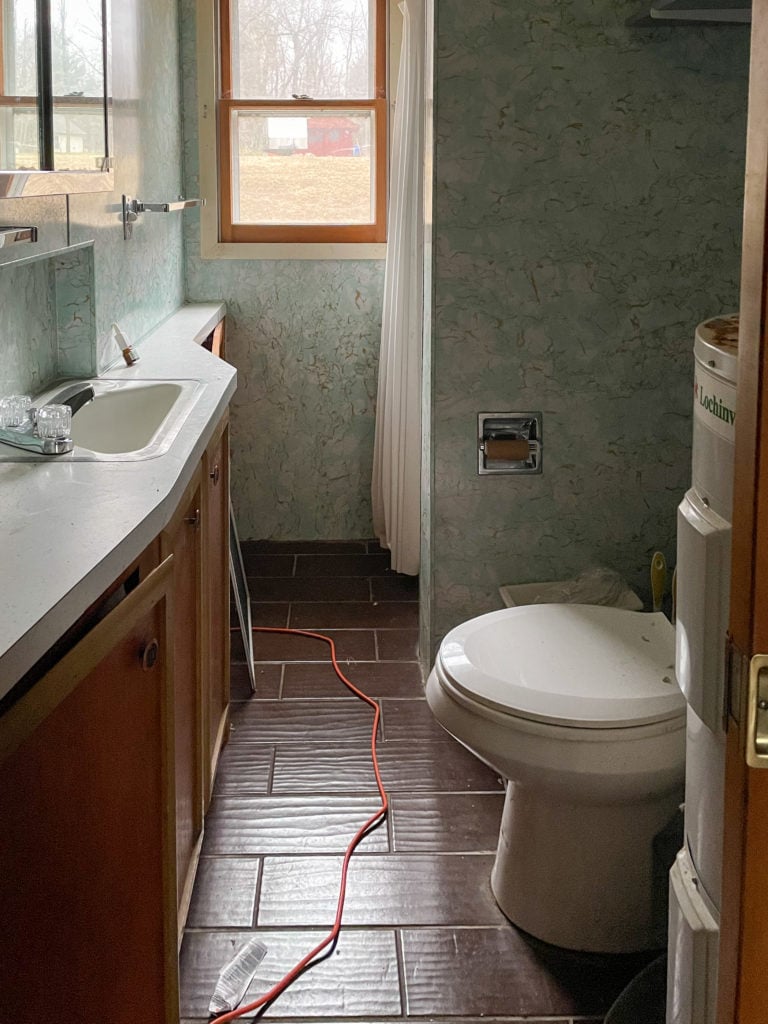 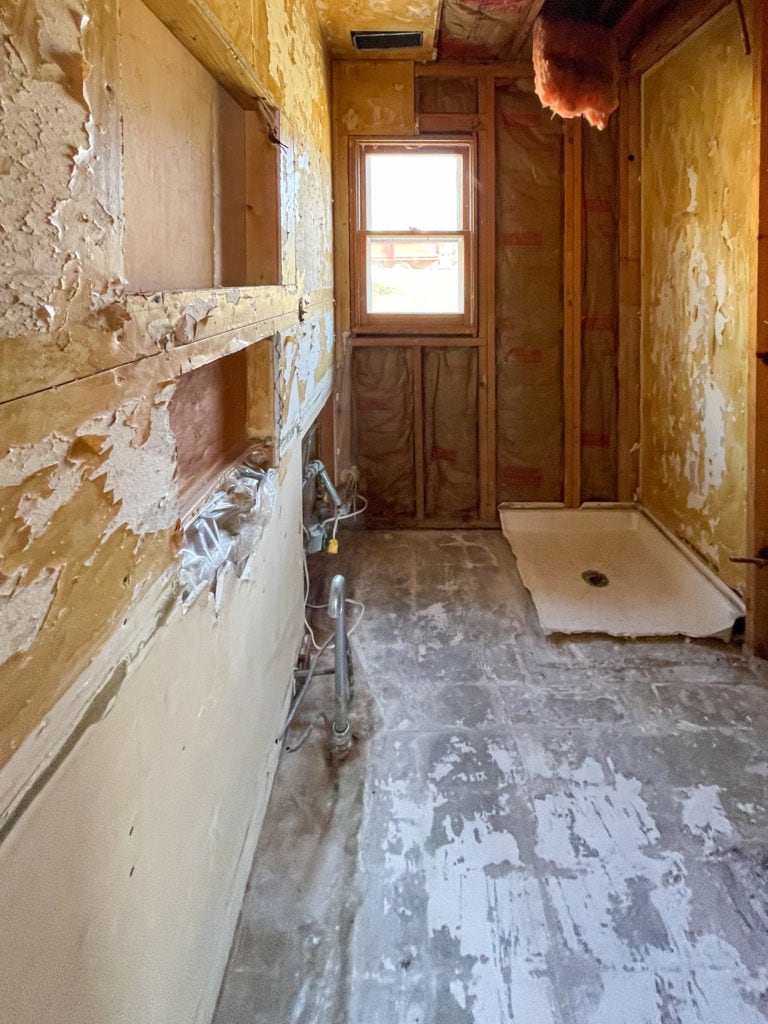 I think this is one of those instances, where it’s got to get worse before it gets better right? Here’s hoping anyway! The bathroom feels so much larger with everything ripped out. It’s actually a 5×8 space which isn’t terrible size-wise. They just had it set up so odd. 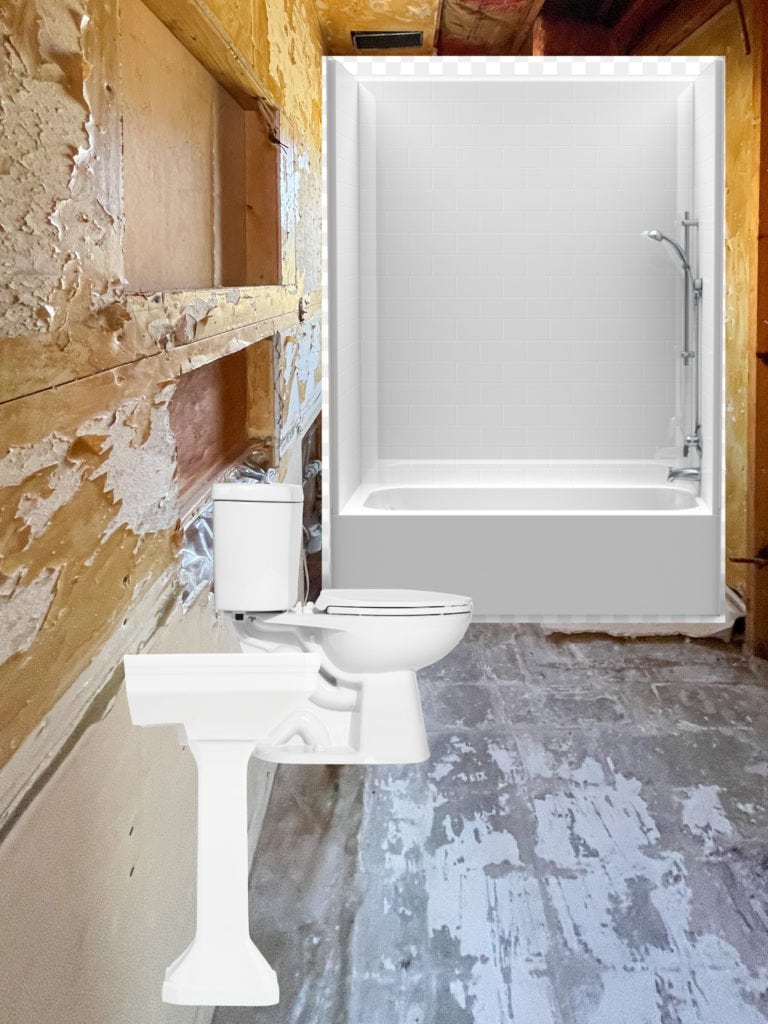 The new plan is to put a shower/tub combo along that back wall, which means we will lose the window. Then the toilet and pedestal sink will be on the same wall instead of facing each other. We also are relocating the hot water heater out of this room, which will make the biggest difference. We are hoping the plumber can rough that in during the next few weeks. 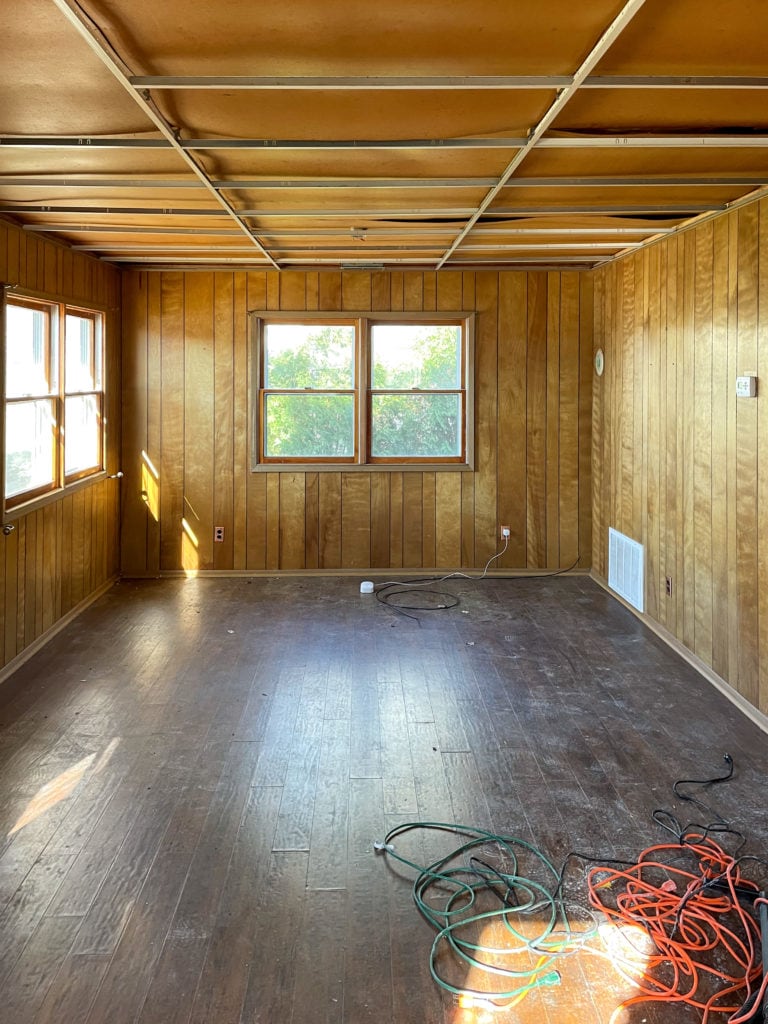 We also ripped out the drop ceiling. I can’t even explain how much better it smells in here now that it is gone. We have plans to plank the ceilings instead (don’t worry I’ll share the whole process!).

We ordered stock cabinets for the kitchen, and they will be delivered in a few weeks. It seems like we are trucking right along. The only snag we are hitting is there is a 10 week lead time on the new windows. This slows down some of the inside painting and trim finishes, etc.

Since we are as far as we can be inside at the moment, we’ve gotten a head start on the outside. 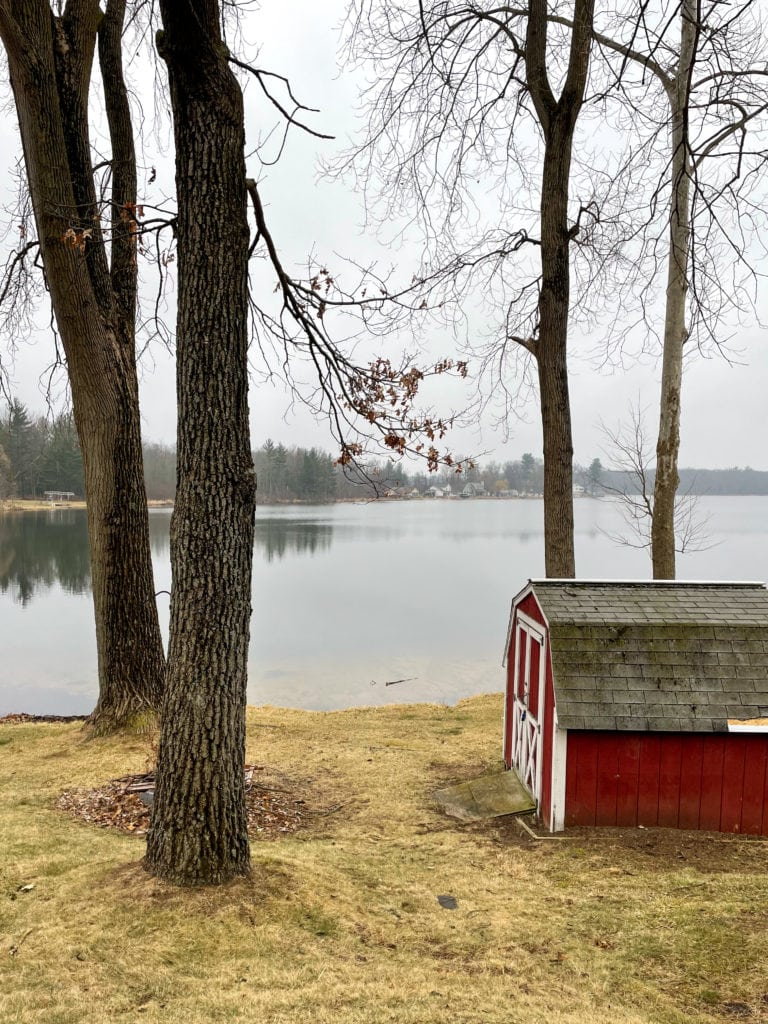 First to go was that dilapidated shed! I cannot believe how much better the view is with that thing gone. 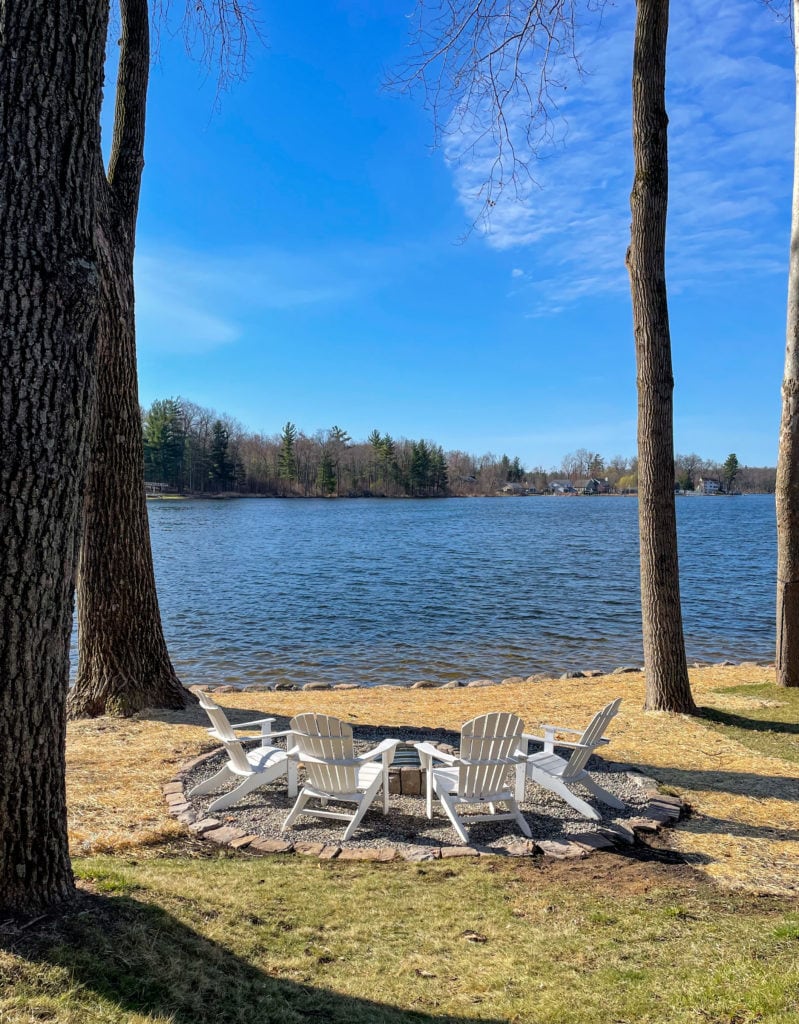 We had a local landscaping company (Landscape Impressions if you are local) regrade the yard, and add a circle of pea gravel for a fire pit area. The hay is covering the grass seed so it doesn’t run into the lake. A  pallet of leftover fireplace stone has been sitting in our garage for the last 4 years. I always knew there was a reason I was hanging on to it! 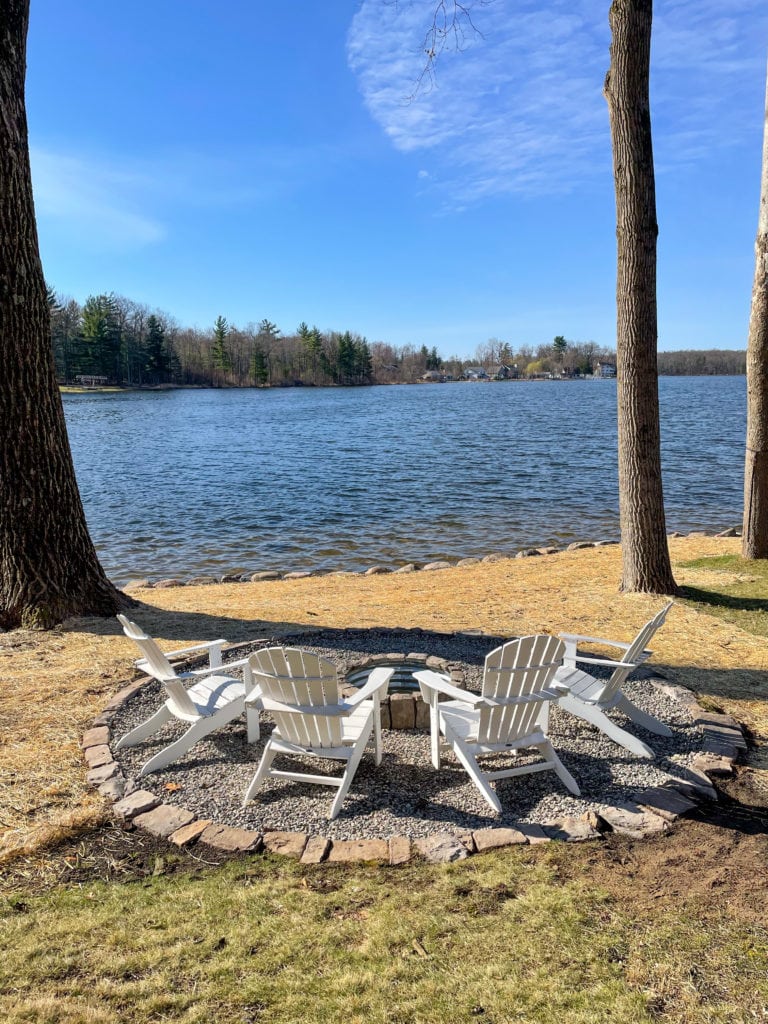 We used it to border the new firepit area. These quick iPhone photos don’t really do it justice. It’s hard to tell in the photos, but this little house sits up on a hill and has a pretty steep yard. We were able to perfectly nestle the fire pit area right in between these 4 trees. We also had all the dead tree branches removed which made a huge difference too. 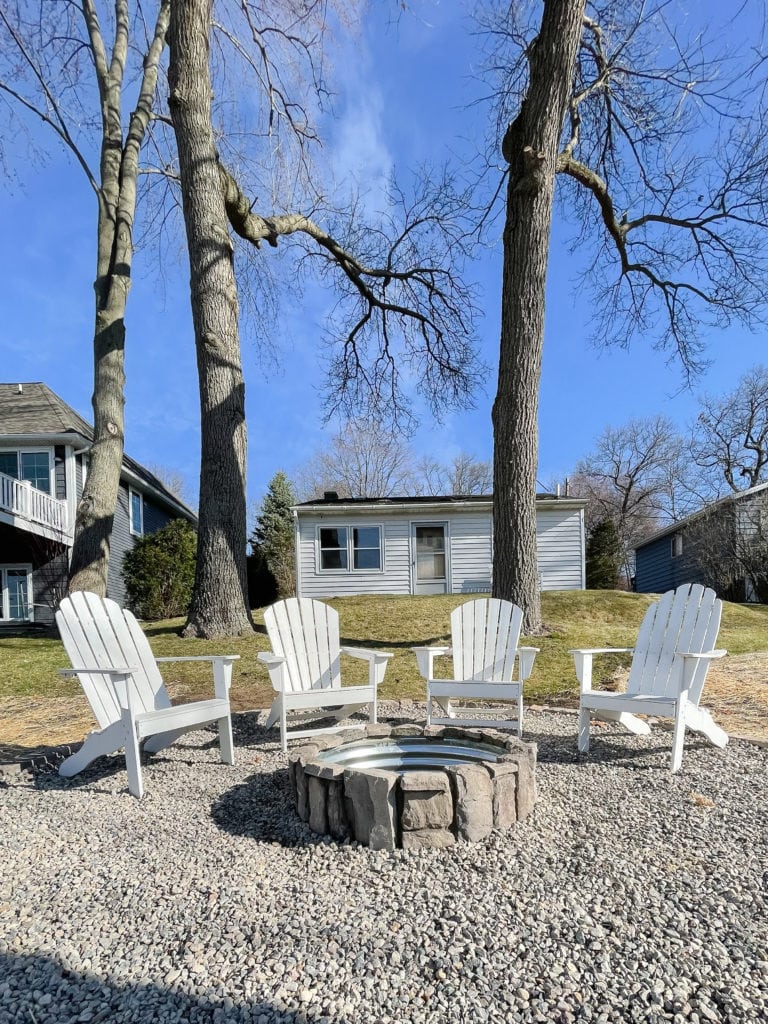 We bought a bag of mortar and surrounded the firepit ring with the leftover stone as well. It was still drying when I took these quick photos, but I’m really happy with how it looks. I’ll have to finish and style this space once the grass comes in, and we finish the rest of the landscaping. I’m so excited about having s’mores out here this summer with the kids. 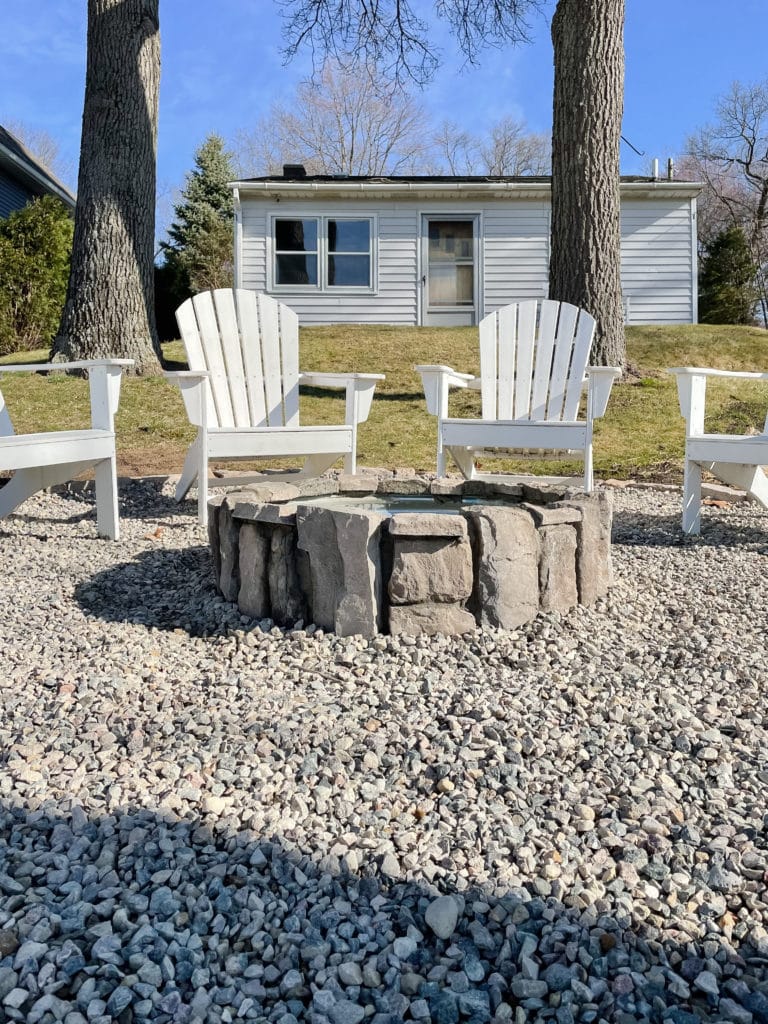 We also power washed the whole house which made such a huge difference too. The siding thankfully looks brand new. We have new gutters coming as well. 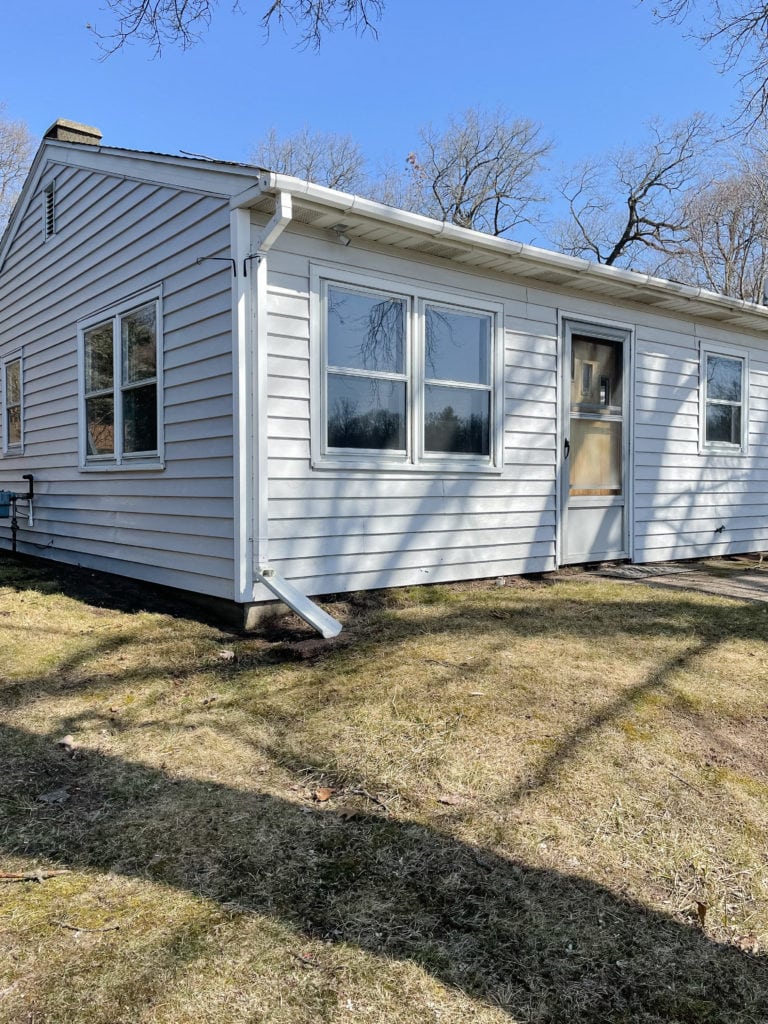 Oh, also I wanted to thank you all for the fun name suggestions! I think Tadpole Cottage and Pollywog Cottage are definitely the top contenders! 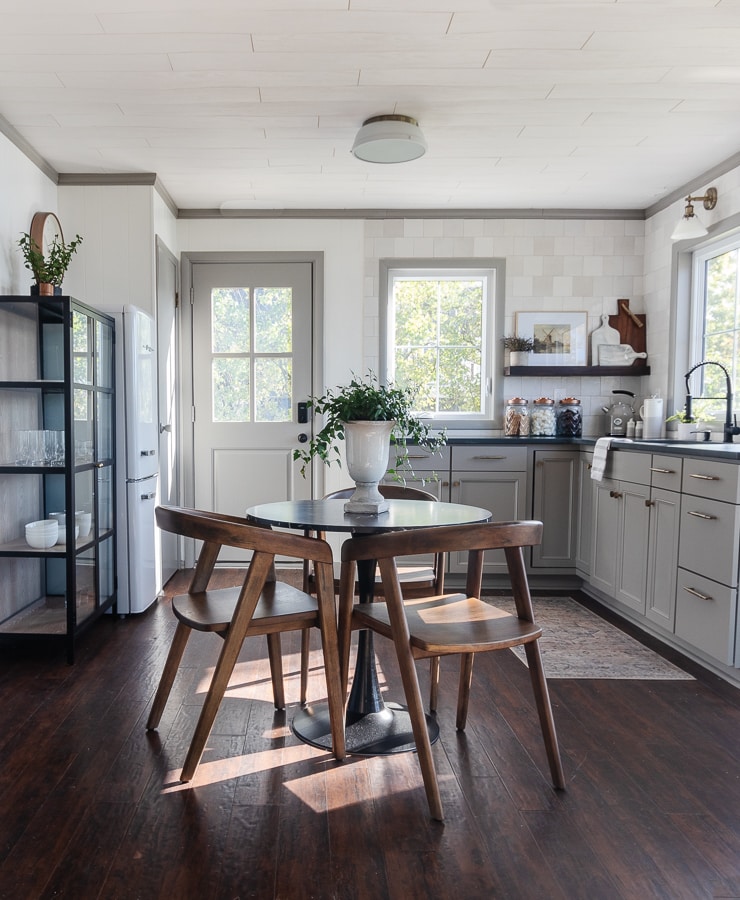 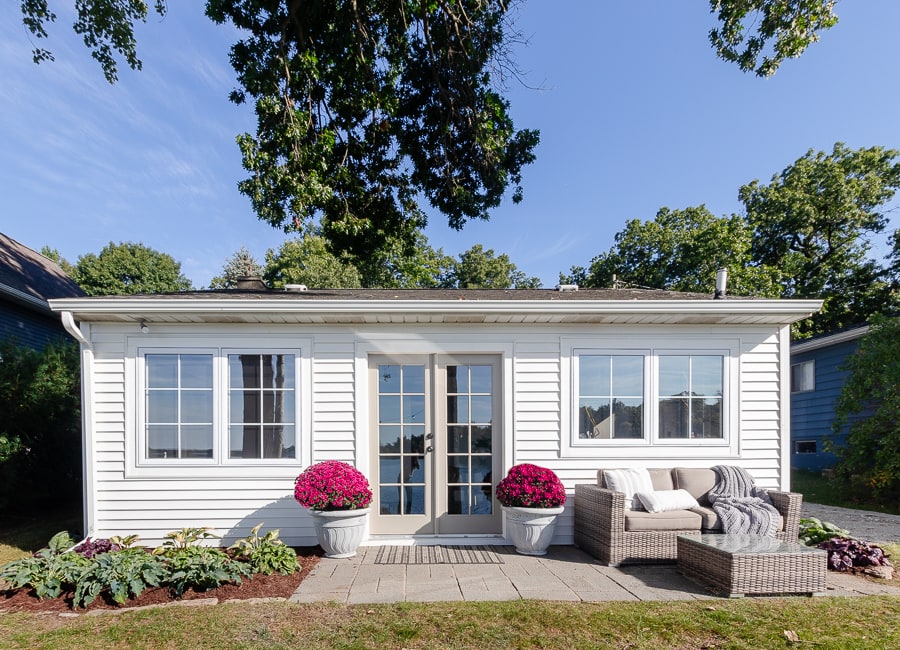 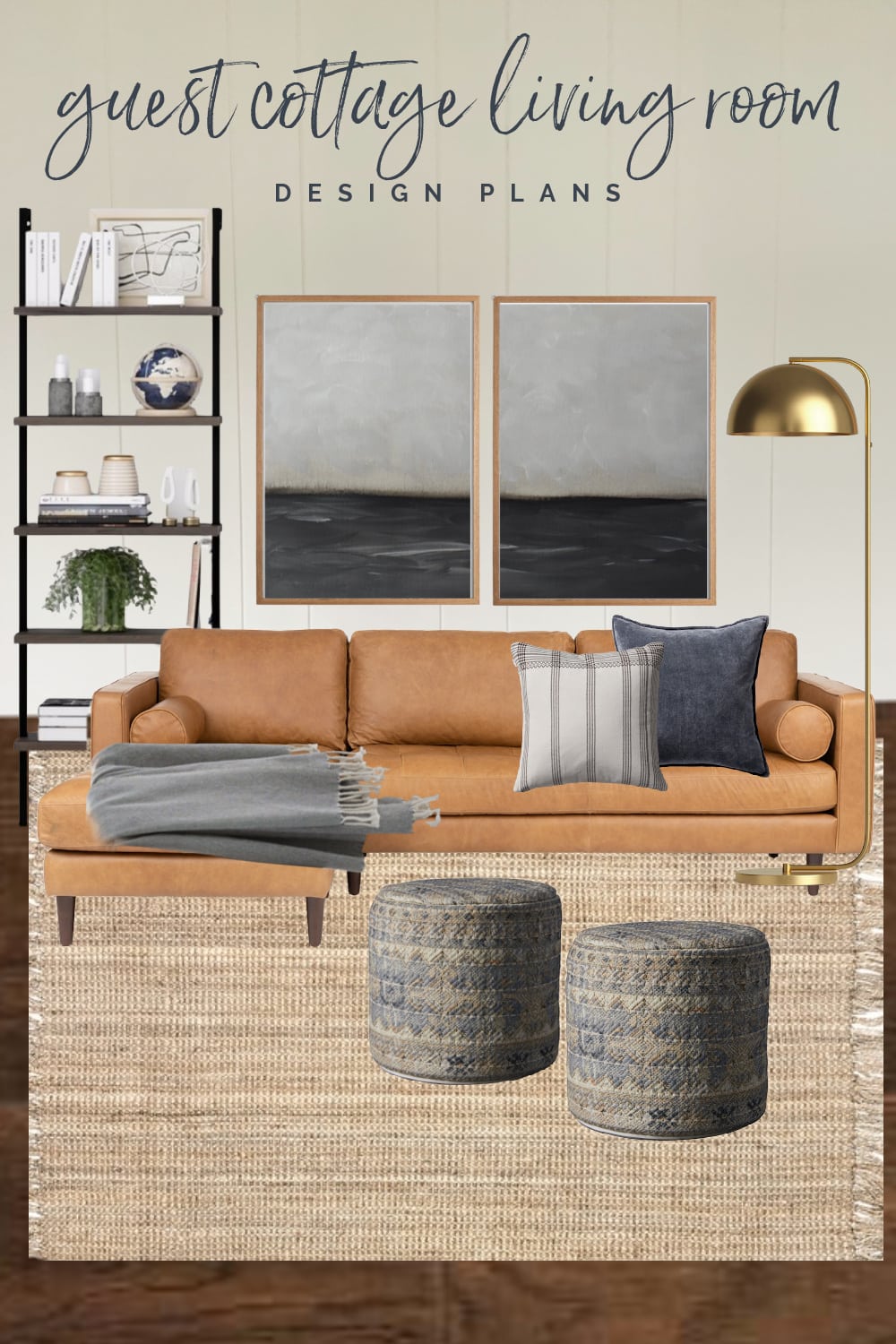 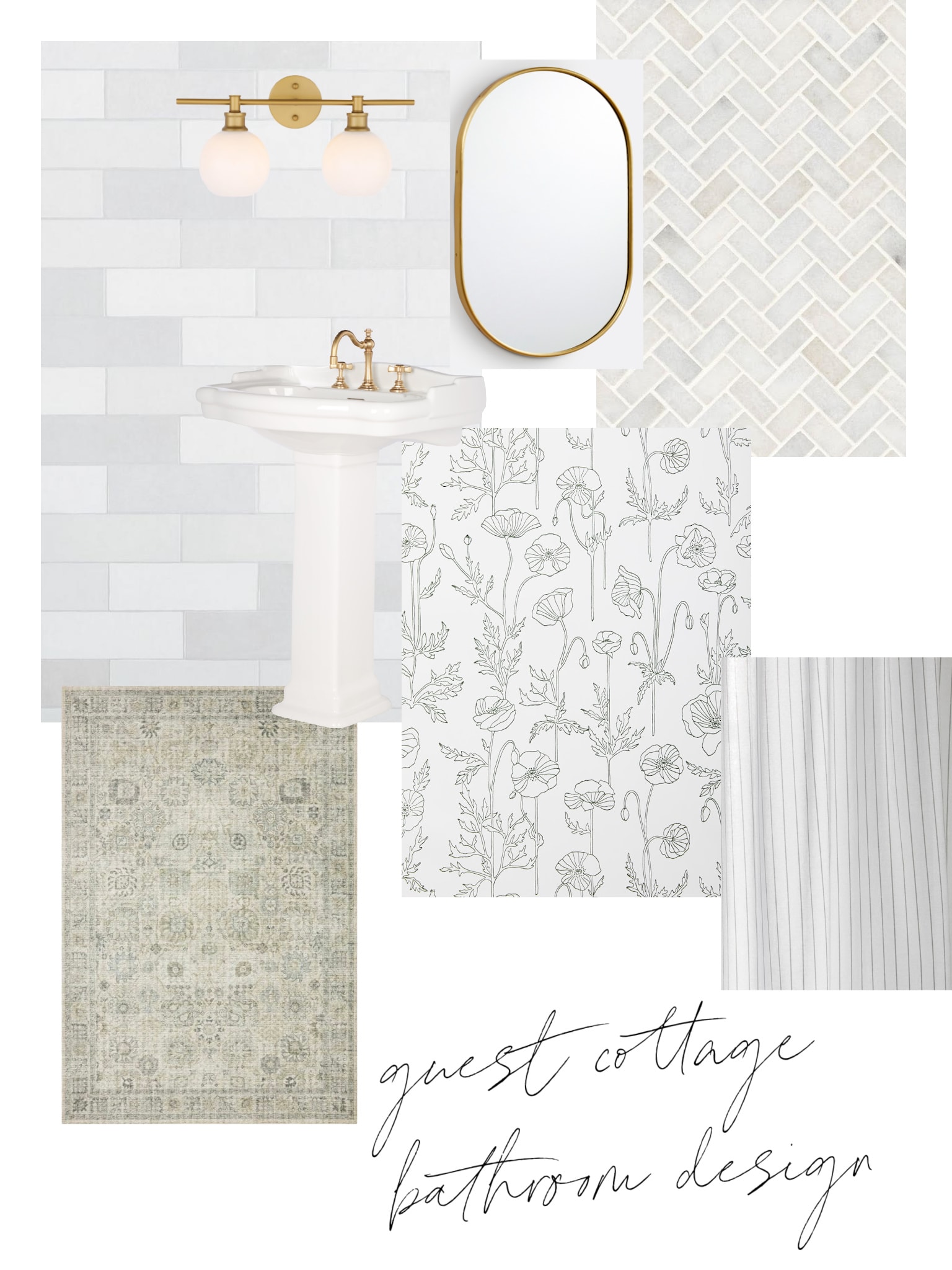 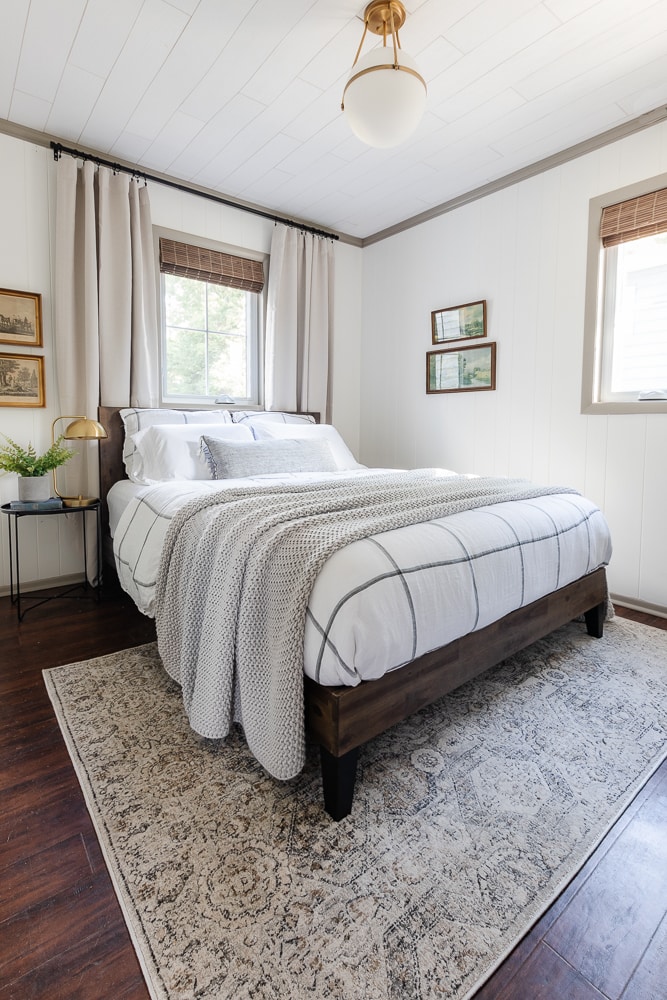 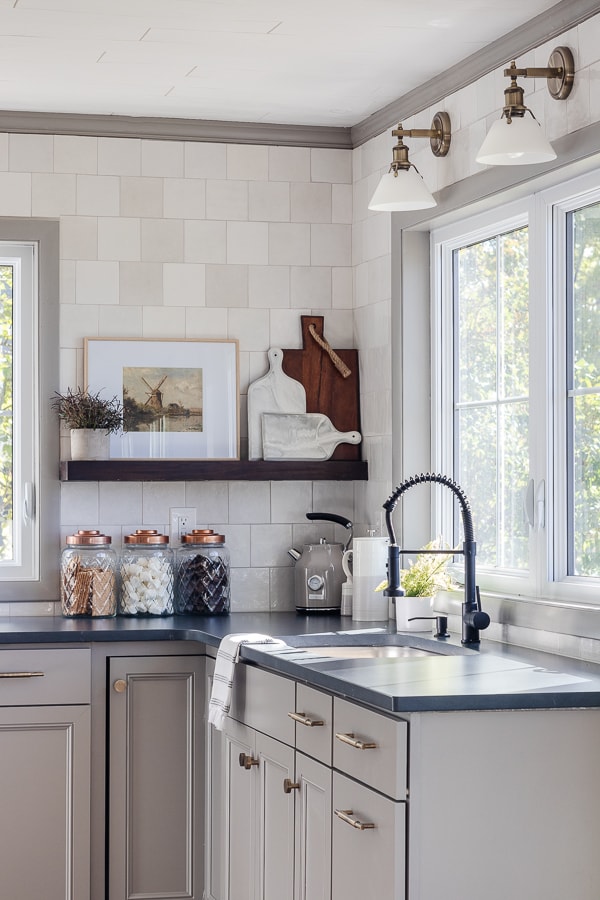